Brachial blood pressure is just the tip of the iceberg. By itself, brachial BP provides an incomplete picture of an individual’s blood pressure.

ATCOR’s CompleteBP™ solution offers both brachial and central blood pressure data through the SphygmoCor® XCEL device to help clinicians and scientists better understand the variations in pressure and waveforms across the arterial tree. By providing unique central waveform parameters that enable a more comprehensive view of arterial health through its cloud-based platform, the CompleteBP solution offers insightful information to physicians for better clinical and health guidance.

SphygmoCor® technology—including both radial artery tonometry (SphygmoCor®) and brachial cuff (SphygmoCor® XCEL)—are the only FDA-cleared devices for noninvasive measurement of the central pressure pulse waveform equivalent in precision to an in-dwelling catheter in the ascending aorta. Our technology is featured in over 1,400 peer-reviewed publications in leading medical journals.

It’s no surprise that central pressures are a more reliable indicator of cardiovascular health than brachial pressures. They’re closer to the source of arterial blood—the heart. Studies show that central blood pressure parameters are more strongly correlated with changes in heart and kidney function as well as brain health.

Noninvasive central blood pressure (NcBP) provides patient-specific information about what is causing hypertension. This can have significant impact on treatment decisions. In fact, many patients may be over-treated or under-treated if medication and other therapeutic decisions are based solely on brachial blood pressures.

In the clinical management of hypertension, SphygmoCor® is essential for individualizing care and better informing blood pressure management, ultimately helping physicians get patients to their BP goal faster and more effectively.

How Does ATCOR NcBP Work?

Like everything today, ATCOR technology is powered by software.

SphygmoCor® XCEL utilizes a traditional blood pressure cuff to measure brachial blood pressure—but it also maps the shape of the pulse waveform in the upper arm. SphygmoCor® then uses sophisticated algorithms to transform the waveform and pressures measured at the arm into central pressures and waveforms—as if they had actually been measured at the heart with an invasive, in-dwelling aortic catheter.

Our technology is protected by a numerous patents and other intellectual property, which cover both the method and the mathematical processes by which the data are collected and processed.

Central blood pressure—or cBP—can be measured directly, with a sensor-enabled catheter, inserted directly into the ascending aorta (the main arterial blood vessel from the heart). However, this procedure is risky (because it’s invasive) and expensive (because it’s risky) and is usually only performed on critically ill patients in acute care settings—for instance, the intensive care unit, or ICU.

Regardless of method or technology, blood pressure is always recorded as two measurements—systolic and diastolic pressures.

Systolic pressure (SP) refers to the peak pressure in the arteries, which occurs when the heart contracts—pushing blood out into the arterial tree. Diastolic pressure (DP) is the lowest pressure, which occurs between heart muscle contractions when the heart refills with blood. An example of normal BP would be 120 mmHg systolic and 80 mmHg diastolic. Commonly, BP at or above 130/90 is clinically defined as hypertension.

Different methodologies are used to measure blood pressure. The sphygmomanometer, the traditional device, measures SP and DP as reflected in a column of mercury. Through the manual inflation and deflation of a cuff around the arm, the device causes different arm artery pulsation sounds that can be detected with the aid of a stethoscope. Because accuracy depends on the user’s hearing, technological advances have replaced the use of the stethoscope with the introduction of transducers or pressure sensors that record pulse oscillations during cuff deflation or inflation. A variety of algorithms are used to derive the systolic and diastolic readings from the oscillation measurements.

Traditional cuff BP devices measure the SP and DP of a peripheral brachial artery (the main artery in the upper arm). Given that there are significant anatomical differences between peripheral arteries (such as the brachial artery) and the central aortic artery near the heart, the blood pressure and its waveform can also be very different at these locations. These differences in pressure and waveform shape vary amongst the population. As pressure pulses travel from the large aortic artery to the narrower peripheral arteries, the peripheral pressure will typically be higher than the pressure at the heart—or central pressure.

We have developed a noninvasive technology for measuring the central (aortic) waveform, which includes the calculation of central SP and DP as well as other cardiovascular parameters. We measure the aortic pressure pulse that directly affects key organs like the kidneys, liver, brain, and heart.

Central aortic hypertension mostly affects these key organs. This could lead to key organ damage if not identified and treated properly and in a timely fashion.

The lack of viable methods to easily measure central blood pressure led clinicians to rely on peripheral BP as a surrogate. While blood pressure is easy and convenient to measure at the upper arm, its ability to ascertain cardiovascular risk is limited. Numerous factors, such as major arterial stiffness (also detected by cBP), affects the pressure wave as it travels from the aorta to the arm, potentially reducing central to peripheral pressure amplification.

Although we too measure blood pressure at the upper arm—with a standard brachial pressure cuff—our technology derives the value of cBP through a series of powerful algorithms performed on peripheral arterial measurements.

Clinically, cBP is a superior predictor of cardiovascular events, including stroke, heart attack, and kidney disease. There is clinical risk associated with relying purely on peripheral BP. For example, a patient’s peripheral SP and DP reading may present within the limits of the normal range on a brachial SP and DP reading, but the patient may actually have central hypertension. Without a cBP reading, a patient may be prescribed the wrong dose—or even the wrong medication altogether. Anti-hypertensive drugs, for example, can have significantly different effects on brachial BP and cBP.

A clinician using only a brachial BP measurement may not prescribe the most appropriate treatment. A patient’s BP may be normalized, but the cBP may not. With only a brachial BP reading, the treating clinician would most likely continue with conventional drug therapy. The patient would still be at high risk of central organ damage from the continued high central SP and DP. Similarly, a patient with high brachial BP, but normal cBP, may be prescribed unnecessary medication.

Studies such as the Conduit Artery Function Evaluation (CAFE) study have demonstrated significant differences in central SP and DP between patient groups treated with different anti-hypertensive regimens, even though peripheral BP levels were comparably lowered.

The CAFE study employed a classic anti-hypertensive study design, randomizing patients to one of two treatment groups (calcium channel blocker vs beta blocker), with all patients managed to the same target brachial pressure, and then monitored to determine if there were differential clinical outcomes. SphygmoCor® was also used to measure subjects’ central pressure. Despite achieving virtually identical brachial blood pressures in both treatment arms the calcium channel blocker group experienced significantly LESS cardiovascular events. The study showed a 4 mmHg lower central systolic pressure in the calcium channel blocker treatment group, thus demonstrating that elevated central systolic and pulse pressure are associated with a higher risk of cardiovascular events and renal impairment, even though brachial pressures were the same in the different study cohorts. The authors (Williams, et. al.) stated: “BP-lowering drugs can have substantially different effects on central aortic pressures and hemodynamics despite a similar impact on brachial BP. Moreover, central aortic pulse pressure may be a determinant of clinical outcomes.”

Sophisticated Algorithms At the Heart of our Technology

ATCOR NcBP technology is based on a novel set of proprietary algorithms, including a generalized transfer function, that are used to transform the peripheral (brachial or radial) arterial pulse waveform to the central aortic blood pressure waveform. The underlying principles are based on cardiovascular hemodynamic and pressure pulse transmission through anatomically different arteries. As a pressure pulse travels from the aortic to smaller arteries, different parts of the pulse (called ‘harmonics’) travel at different speeds, changing the pressure values and pulse shape when reaching smaller peripheral arteries. Algorithms applied to the peripheral pulse waveform, using a proprietary ‘transfer function’, represent the relationship between the harmonics of the central and peripheral pulses. This will transform the peripheral arterial pulse into central aortic pressure pulse like the one in the following graph.

On the left is a pressure waveform acquired from a peripheral artery. The application of a generalized transfer function to this waveform, which corrects for the distortion that occurs in waveform harmonics when the wave propagates from the central to peripheral vessels, allows for the derivation of the ascending aortic pressure waveform, as seen on the right. 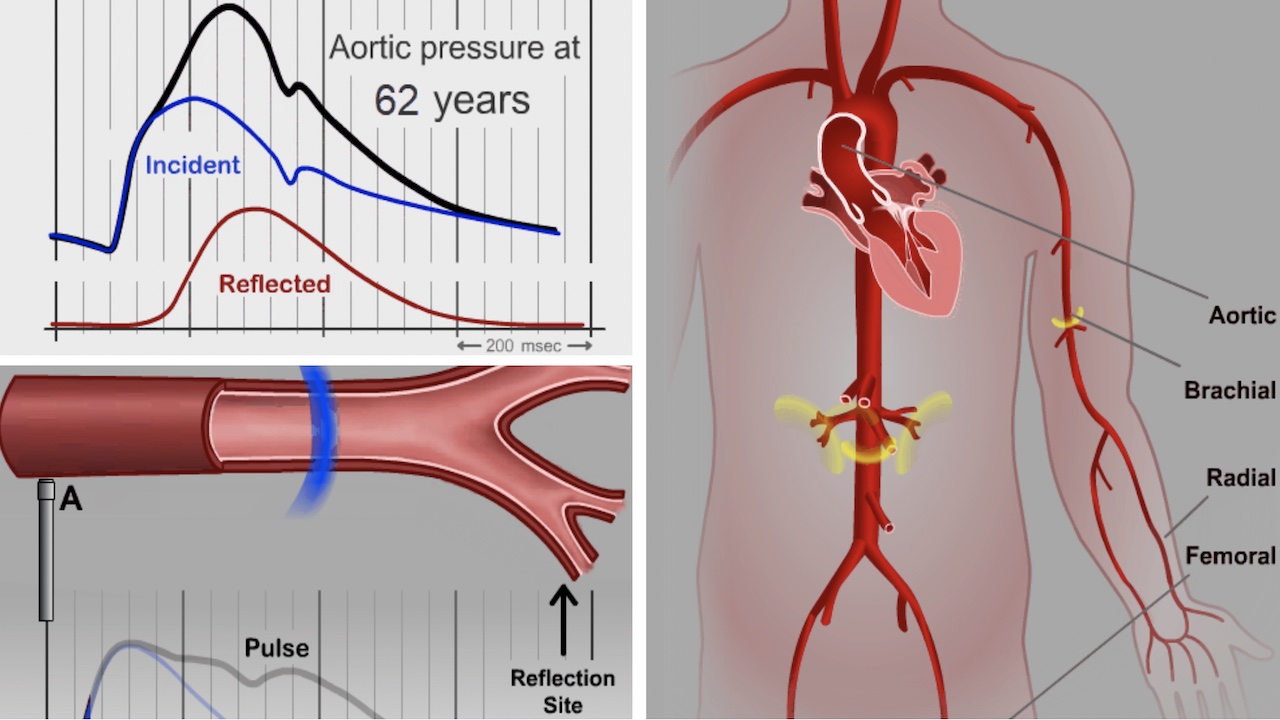 XCEL V1.3 is the latest ATCOR release of the base XCEL software.  It is a required installation for all clinical practice, academic research, and clinical trials.

XCEL Secure Data Option software enables Part11 readiness for clinical practice, academic research, and clinical trials.  Prior to install, confirm that the XCEL V1.3 software is fully installed prior to the XCEL Secure Installation Package. Contact Us for more information.